On April 15, 2021, Chicago officials released the police body-camera video of the shooting and killing of 13-year-old Adam Toledo as he appeared to be compliantly raising his hands after a foot chase. Someone on Twitter suggested that the media stop replaying the video because it was triggering to see a child die like that. I responded that while I agreed in principle, the “violence against BIPOC [Black, Indigenous, and People of Color] folks is often abstract because we aren’t really seen. Sometimes white folk need to see.”

Someone else asked if saying “white folk need to see” wasn’t being racist against her, and she didn’t understand why, as a minister, I was “playing the race card” since “God doesn’t see color.” I probably don’t need to mention she was white.

There’s a lot to unpack theologically in “God doesn’t see color.” I imagine when someone says it, they’re sharing a belief in God as a benevolent being who does not discriminate, who loves equally, and who sees us not by our race, ethnicity, or identity but by our thoughts, words, and actions. God sees the content of our hearts, not the color of our skin. It’s meant to be a well-meaning, inspiring, perhaps even comforting characterization, but in reality, it is a lazy, juvenile, and harmful theology.

“God doesn’t see color” reflects an understanding of God that has not progressed past a childhood grasp of All That Is as a personified being (likely an old bearded white man) with human characteristics: He sees us, hears us, loves us, protects us. He is essentially a superhuman parent. And parents love all their children equally, right? (Wink, wink.)

Some of us eventually grow up, but only a little. We believe that God isn’t a person, but a Presence and Power, Love, Spirit. And yet we still pray as if God can hear and answer our prayers. We still speak about God as if God thinks about us and our lives. We still ask how God allows the horrors of the world to transpire and answer with a dismissive, “It’s all part of God’s plan.” Or as we might translate into New Thought terminology, “It’s all in divine order,” which is a tragic misunderstanding of that principle.

This is when bad theology becomes harmful theology. Since “God doesn’t see color” and it’s “all in divine order,” some of us feel no need to get involved because in the universal scheme of things, this is how it’s supposed to play out. It’s a privileged theology ... a white privilege theology. I understand that when we go to church, we want to be inspired to transform, not implicated in society’s greatest ill.

We want to feel good, not hopeless in the enormity of it all. It’s probably why the topic hasn’t often come up. I invite you to realize that we BIPOC do not have the luxury or privilege of avoiding the issue. I cannot take a break from my Blackness or from how I am perceived as a Black man in America.

It is also spiritual bypassing. Spiritual bypassing is the practice of using spiritual beliefs to avoid difficult and unresolved issues or as evidence that these issues don’t exist. Systemic racism affects us all, clearly more so for BIPOC. It will end only when everyone, especially those who directly and indirectly benefit from it, sees it for the scourge that it is and helps do the work to undo it.

Too often in Unity I’ve heard, “It’s not ours to set it right, but to see it right!” and “What we resist, persists,” so we didn’t speak directly about the injustices of the world. We were invited to not even think about them for fear of either polluting our consciousness or energetically perpetuating those injustices.

We were taught to see the Christ in each other, which often meant looking past each other’s problems. The “denial” of the practice of denials and affirmations increasingly felt like “ignore.” We were also constantly reminded of the fifth Unity principle, that it wasn’t enough to know the principles, we had to live them. Is it possible that, over the years, many left Unity churches not because spiritual transformation was too challenging but because the cognitive dissonance was too overwhelming?

“We believe that God isn’t a person, but a Presence and Power, Love, Spirit.”

When I say “white folk need to see,” I am referencing the racial history and tendencies of this country by which change came after the privileged bore witness to the system of discrimination and oppression they did not want to admit to maintaining. Change came about after white America saw the grainy images of dogs and fire hoses set on peaceful protestors in the Deep South, the batons crushing skulls on Bloody Sunday, and more recently, the knee of a white police officer on the neck of a handcuffed Black man for more than nine minutes.

Suddenly the dubious stories of a tormented people were believed—because they were seen. After George Floyd’s murder, the streets were filled with as many (if not more) white protestors as Black. Thanks to Darnella Frazier, a brave, Black 17-year-old with a cell phone, white America saw centuries of systemic racism encapsulated into one brutal deadly act of violence. Sometimes white folk need to see.

Sometimes we spiritual people need to see too.

We need to see that while our teachings of oneness and love hold the seeds for justice and equanimity, they inadvertently encourage spiritual bypassing. When we bypass, regardless of the love in our hearts and the purity of our intentions, we are enabling a system of oppression. There is no neutral ground in racism. We are either being anti-racist in word and deed or we are maintaining the status quo. To live our spiritual principles, we must both imagine a world that works for all and then go about creating it. If not us, who? If not now, when?

By the way, when you tell me, a person of color, that God doesn’t see color, you have just rendered me invisible. You’ve just told me that God doesn’t see me, and because you are aspiring to be God-like, you don’t see me either. If you’re thinking, That’s not what I meant or that I need to work on how I hear things, welcome to bypassing.

Your intention and meaning don’t matter. You’re telling me that God doesn’t see my pain and neither do you, that you don’t see or believe my suffering, that my fears of being killed during a routine traffic stop because of the color of my skin are unfounded. You are telling me the weighty emotional burden I carry because I am still seen as less than by so many is easily shrugged off, and the realities of being Black are immaterial to God and therefore to you. You are telling me that what I experience doesn’t matter ... that I don’t matter. Even by your theistic theology, there could not be anything more God-less.

I write this not to call anyone out, but to call us in and to call us up. The work begins, as always, with the individual, including me. As a congregant and a minister, I have spiritually bypassed in order not to rock the boat or lose congregants or to assuage my own discomfort.

Check in with yourself right now. How do you feel as you read these words? I’m not asking what you think, but how you actually feel. Are you more relaxed? Tense? No different? Do you feel joyful? Angry? Empowered? Ashamed? Disappointed? Afraid? Stop and take a moment to notice, without judgment. There’s no right or wrong feeling, only the opportunity for insight, acceptance, realization, transformation, and growth.

Remember how you felt when you saw racial injustices on TV or heard people make both obvious and subtle racist comments. Did you ignore them or did you respond?

These questions are invitations to examine our consciousness, our beliefs, and our spiritual communities with compassion. They are not meant to condemn, embarrass, or shame. If you have been spiritually bypassing and want to be more engaged but you’re afraid of getting it wrong, know that there are many safe spiritual spaces designed for that very purpose. Two I recommend are The AntiRacism Institute created by The Unity Center in San Diego, California, and the 8:46 Book Club in project_SANCTUS.

Our personal and denominational theologies are not meant to be rigid. They should be dynamic and evolving, just as we are, thanks to life’s complexities and nuances. Challenging how our spiritual beliefs and principles have been understood and practiced does not make them wrong. It makes them relevant. This is not the time to be irrelevant. This is the time to be the presence of justice.

This article appeared in Unity Magazine® and was a 2022 Folio: Eddie a winner for the best single article in a religious/spiritual consumer magazine.

Rev. Ogun Holder is an ordained Unity minister, certified spiritual coach, teacher, and podcaster. He is the author of Rants to Revelations (Unity Books, 2012) and the cofounder of an online spiritual community called project_ SANCTUS (projectsanctus.com). For more information, visit revogunholder.com. 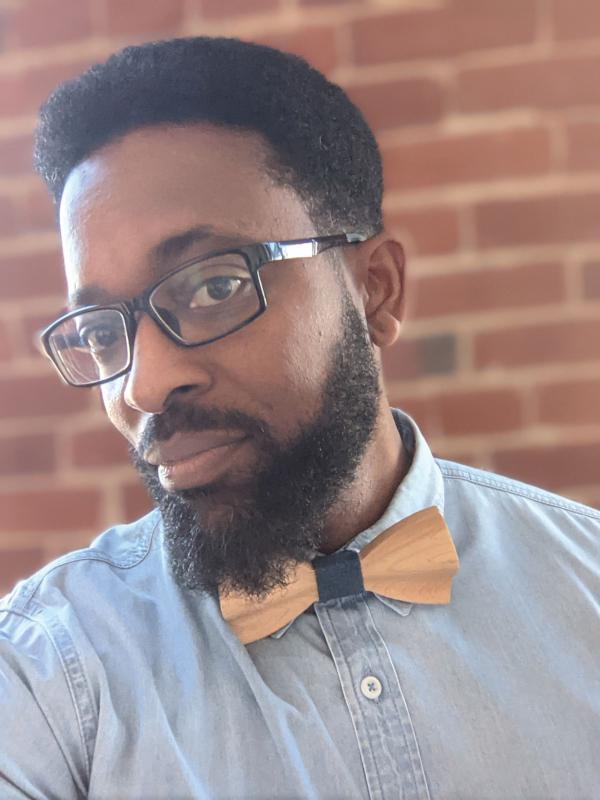 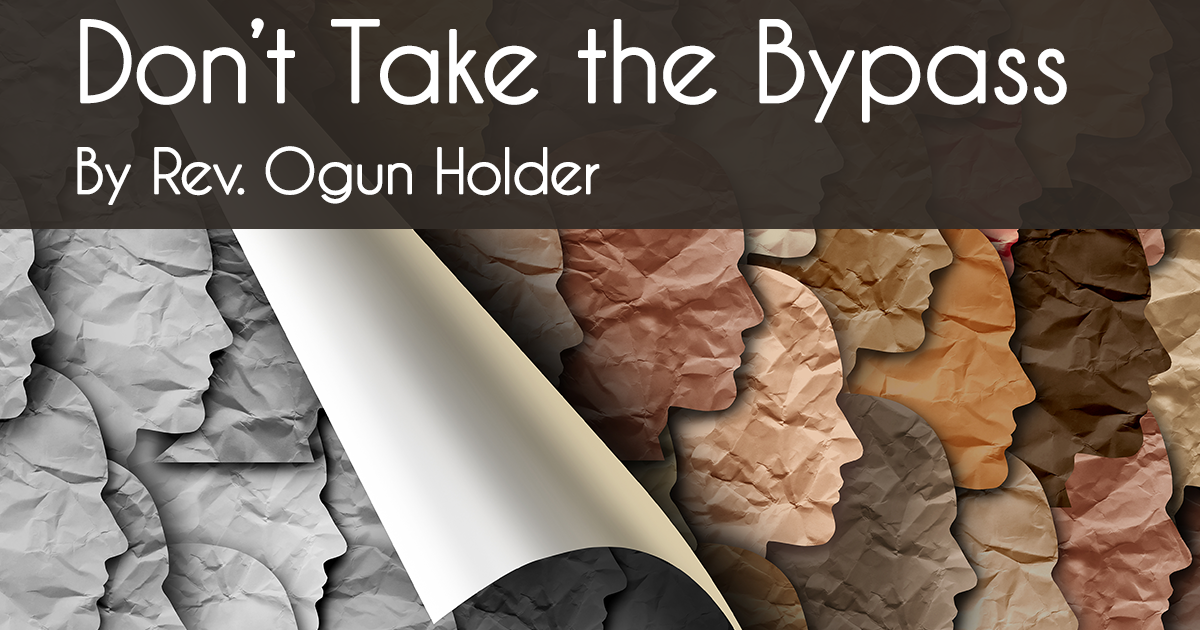